Programmed at the Whitney

Article
The Whitney Museum of American Art seemed to be catered to me over the holiday break. 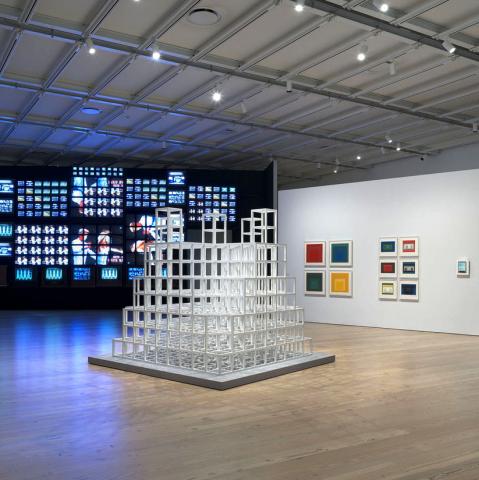 Each floor seemed to have an exhibit that appealed to some artistic interest of mine. There was a show about regionalist art, [Andy Warhol], and most relatable, [new media].

I'm not sure how long the regionalist art exhibit was up for. I remember [seeing it in March] when I visited. It was personally meaningful to me seeing it among the other shows. I doubt it was intentional on the part of the curators. Although there are modern qualities to the landscape paintings, my interest in [how it relates to new media] is, as far as I'm aware fairly unique.

Andy Warhol is pretty unavoidable in art school, and generally in our culture due to the nature of the work. I sometimes neglect to show interest because it feels like it's an easy name to drop, but his influence and how it relates to new media is undeniable. I read The Philosophy of Andy Warhol during my first semester in grad school because I thought it might help with insight into my chosen focus.
I told my buddy I went to Warhol show and he said "He would've loved social media." Dear God, he would have. Mass production, his obsession with screens, fame, and his personal insecurities are all things that would've fit right into online social platforms. However had he been born today it's extremely unlikely his work would've been noticed. Aside for him being at all innovative, He would've been just one little star in all of cyber space.

The show that really hit the nail on the head was Programmed: Rules, Codes, and Choreographies in Art. I knew I'd be interested, but I had no idea how relatable it was. There were multiple artists in the show that I had referenced in my [graduate school thesis project], Nam June Paike, Casey Reas, Corey Arcangel, and of course John F. Simon Jr.. The show introduced me to some work that I felt related to what I was doing now, which is almost certainly why my art schools made us visit other gallery openings. Back when I was in art school the medium I studied was not as widely accepted as it is now, and most of the shows I had to go to I did not find relatable. That's no longer the case. I feel like there are now often new media shows that are very similar to my current work.
This satisfies some of my insecurities. The wording in the descriptions of the work was instantly understandable by me, and sounded like something I would write. Something I'd think my words lack value and not worth my time writing, or worse off, someone else's time reading. The work itself was very similar the things I construct in my own time. My work doesn't have the same polish, but I'm also not trying to show it, and it's certainly not seen in anywhere as prestigious as the Whitney. What it really did was give me a clear goal for my work, polish to show in a gallery.

My motivation and respect in my own work has been refreshed.