Article
My favorite recently discovered book is a naturalists' must-read. 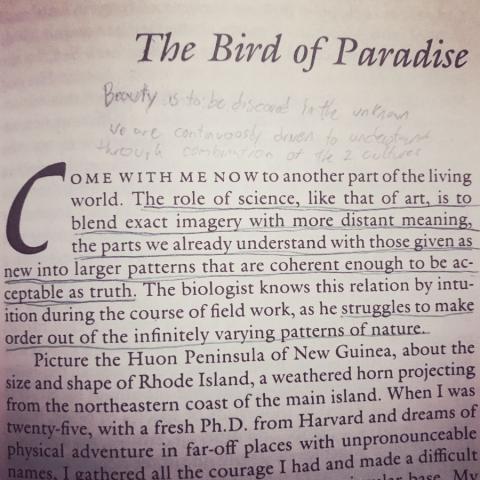 I was introduced to E.O. Wilson and the phrase he coined, biophilia in graduate school. I watched the NOVA documentary, Lord of the Ants I watched while I worked on projects in gradate school. I believe it caught my eye because my chosen metaphor for [my thesis] concept was lightening bugs, so I wanted at least a hint of a biological understanding of [emergence.] I gravitated so much to it I watched it over and over again.

After [dating a farmer] I felt I had to prove my admiration for nature, so I bought a book long on my wish list, Biophilia. I had no idea how much overlap with science and the humanities the book was chock full of. I got half way through when I realized I had to restart and begin highlighting passages. I used blue ink lines for facts I might want to reference, green ink lines for things I found inspirational, and pencil for notes in the margins and chapter summaries at the beginning. That allowed me to breeze through the book easily over and over.

My biggest take away was the realization of one of the most valuable contributions to mankind art has. Art imagines new horizons and pushes the boundaries of what we perceive as reality. New paths are illuminated for science to explore, which in the in turn challenges artists to imagine newer horizons.

What started as a desire motivated by modest insecurity to prove my interest in different subjects resulted in discovering the value in my own focus.